On October 8, 2016 the Amabel Property Owners Association organized a meeting of residents to talk about the Sauble Land Claim.  At that meeting I showed a picture of an 1855 draft map, made by surveyor Charles Rankin, of Amabel township, the Saugeen Reserve, and the Chief’s point reserve.  I also showed on the map what appears to be a post, along with the notation “NE < Ind. Res.”.

David Dobson had earlier come up with a theory of the meaning of the notation “NE < Ind. Res.”.

At the October 8 meeting I showed how I believed Mr.  Dobson’s theory was flawed.

My powerpoint presentation, including my critique of Mr.  Dobson’s theory, was posted to:

Mr. Dobson reviewed my presentation and took offence, posting on his blog a reply to my critique of his theory:

A long discussion followed in the form of comments to the posting, with two anonymous commenters , AM and AG, joining in.

I determined that I needed to use drawings and pictures to carry on the dialogue, so I am posting this on my own blog at:

(with a link posted on David’s blog that directs to mine).

There are three or four theories being put forward by Mr. Dobson and AM regarding the “NE < Ind. Res.” notation.

The first theory by Mr. Dobson is that the “NE <” in the notation refers to the NE direction of the east boundary of the chief’s point reserve.   This has been disputed by me and apparently also by AM on the grounds that the direction of the chief’s point east boundary is north westerly, definitely not northeast or north easterly.  Mr. Dobson has conceded that he erred and that theory 1 is incorrect.

The second theory is by AM (who is anonymous), who said:

At that notation marker if you draw a cross on the page at 90 degrees to the page (which is how you calculate bearing directions) you will find that that extension line “construction line” which passes through the marker termed “N.E < Ind. Res.” actually runs in the North Easterly direction from that cross. Merely to describe this line Mr. Rankin termed it as such on this working draft copy because in fact this line runs coincident with the Saugeen Easterly boundary that ends at Main St.

Contrary to AM, drawing “a cross on the page at 90 degrees to the page“ is not how bearing directions are calculated.  The edge of the page is not a reference for Rankin’s lines and the edge of a page is rarely a reference for any survey map or plan.  Contrary to Mr. Dobson and AM, the edge of the page is not an indicator of true north.  Rankin would never have made such a huge mistake as to say that the “extension line “construction line”” which passes through the marker termed “N.E < Ind. Res.” actually runs in the North Easterly direction”.  The extension line in fact does not run north easterly from any point on the map.  It is not plausible that Rankin would term the direction of the “construction line” as “NE”.   AM erred in assuming that the construction line ran north easterly and erred in assuming that Rankin saw the construction line as running North easterly.  The error is fatal to the AM theory.

This line then is projected N.E. and used to intersect with the extension of the easterly boundary on Chief’s point lands which it extends right though the Sauble River, This is how that bearing of N 13 deg. W is established and as shown for the bearing of the Easterly Boundary Line on Chiefs point.

That “N.E < Ind. Res.” marker was simply a way to relate the 2 separate reserve easterly boundaries together – that’s all.

But surveyors put bearings and distances on maps, not angles.  The “N 13 ° W” on the chief’s point eastern boundary as on Rankin’s final map of 1856  is a bearing, not an angle.  It is a notation to describe the direction or bearing of a line, not the relationship between two lines.   If Rankin wished to describe an angle, which would be unnecessary and highly unlikely, he would describe it as just as “13 degrees” (13°) and he would mark it as 13 ° as in the drawing below.

The theory was already dead, but that second fatal flaw makes sure.

The third theory is what I will call the Dobson / AM theory which is slightly different from the AM theory.  If anyone prefers to think of it as AM’s theory explained differently that’s fine – my critique applies just the same.

The post at midpoint lot 31 represents where the True North line first meets land after extending through the water of Lake Huron from the termination of the Saugeen Reserve at Main Street. At this point he [Rankin] indicated, by way of notation, that True North ran in a north to east direction in relation to the page. To understand this you need to place a directional crosshair at the post to show how NSE and W are represented on the page.

The vertical arm of AM’s “crosshairs” is parallel to the edge of the page.

Mr.  Dobson drew these “crosshairs” like this (solid blue lines):

But the edge of the page does not run north-south true.  Mr. Dobson’s (and AM’s) crosshairs are wrong.  AM’s statement that “True North [runs] in a north to east direction in relation to the page” is not only false, but also nonsensical.  True North may run in a direction slightly off vertical of the edge of the page, but the north line does not and cannot run northeast in relation to anything.  A True north line runs North, period.  So the explanation cannot account for the “NE” in “NE < Ind. Res” notation, because there is nothing northeast about the true north line, crosshairs notwithstanding, edge of page notwithstanding.

Then according to AM the theory goes:

Then the theory goes:

Rankin was using this map to help in calculating the directional bearing of Chief’s Point eastern boundary. To prove this, the map shows that he first calculated the bearing by using north as it is presented on a page; straight up and down, which gave him a rough idea of the direction bearing

Contrary to AM, North is not presented on the page as straight up and down.

Then the theory goes:

If you look closely enough you can actually see it written down on the map and the straight construction line from the top of the page which helped him calculate this angle. The bearing is shown as N 11° W.

Magnetic is related to true by “variation”

One is the top boundary of Amabel township, where he writes “east by needle”, which means east magnetic or 90 degrees magnetic. 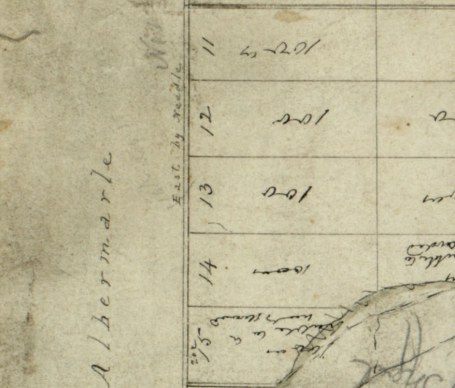 But on the final map he defines the direction as S 88 deg W TRUE.  Which is the same as 88 deg True, just named in the opposite direction.

Rankin measured the variation and logged it in his field notes as 2 degrees west. The same is on each page of the field notes.

Magnetic bearing = 88 ° plus 2°  =  90°  magnetic.  “East by the needle” and “S 88° W True” are exactly the same line, only specified as opposite directions.  The final map direction is not a correction of the draft map direction.

For the traverse of the eastern boundary of the chief’s point reserve, field notes page 146, October 8, 1855, Rankin clearly indicates the astronomical direction (not the angle) as N 13 degrees West”.

When variation is westerly the formula is:

Contrary to Mr. Dobbins, the 11 deg on the draft map was not an error.

The word “true” on the final 1856 map does not indicate a correction of an error.  “True” means “astronomical”, not “corrected”.

To show this is what he [Rankin] did, the bearing from the 1855 map of N 11° W is incorrect and the actual bearing correction of N 13° W True can be seen on the official map of 1856. The working copy does not use the word “True” in the bearing description.

Of course the working copy did not use the word “true”.  Because the bearing was magnetic, not true.

I put forth the possibility that the notation is identifying the two lines as a statement. NE < = True North extension line and Ind. Res. = Chief’s Point extension line. Therefore the notation would read North Extension Angle Indian Reserve. What makes me think this is that the angle that produces the N 13° W True calculation is so pronounced on the page it just seems like an obvious conclusion. Also, the notation spreads across the span of the 13° angle. This makes it difficult for me to believe that this is a coincidence.

I believe this is the same as the Dobson /AM theory, but that makes no difference.

It fails for reasons above.  It would be very unusual for Rankin to put an angle on a map, and if he did he would put a number in only (not a direction) and he would put the number right in the intersection as in the drawing above.

I agree that NE means Northern extension, but < does not mean “angle”.

As one writer, a surveyor, put it:

The notation < means that this is the direction or angle of the line that has to be followed south to get to the boundary.

This entry was posted in Uncategorized. Bookmark the permalink.